The Australian stand-up comedian may not get another chance to win again after becoming the unlikely winner for The Most Popular Personality category.

Last night’s event at the 2019 Gold Logies took a cringeworthy beginning from Tom Gleeson’sopening monologue to his brutal winning speech, and not everyone is amused, especially his rivalry Amanda Keller who said she “struggled” with his campaign.

But Gleeson isn’t one to hold back his thoughts. The comedian took to the stage and showcased his opinions about the event, going as far to say it “has become a joke this year”.

To win the honours of a Gold Logie, nominees are to campaign for its public votes, and according to Gleeson in order to win “you have to fight dirty”: “Turns out, I’m really good at manipulating people in the media to do things for me. Which if you think about it, is why we’re all here. So maybe I deserve this award.” But he promised that once he won, he will bring back the axed-show Hard Quiz on ABC.

Perhaps the “ending of the Logies” will open up more possibilities for future winners.

So, what did Australian’s on Twitterhave to say about this? Most congratulate the comedian for his prize, and agree to his opinions on how silly the national award-winning show really is. 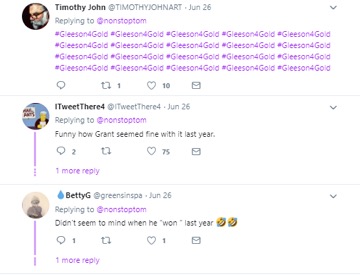 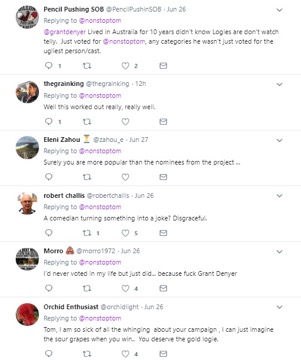