If there’s something teenagers and pre-menopausal women have in common, it’s acne — the bane of their existence. In Western countries, it affects approximately 90% of the adolescent population and 50% of adults, causing mostly insecurities and endless trips to the dermatologist.

Acne is no fun.

And just like someone who’s been lucky enough to have never dealt with it (knocking on wood right now), there are a few populations around the world that are unfamiliar with all the emotional and physical hassle that surrounds this major skin problem.

One such population is the one living in the tiny island of Kitava, located in the eastern coast of Papua New Guinea.

In a study of 1,200 subjects, conducted by a team lead by medical doctor and professor Steffan Lindberg for over 800 days, no signs of acne were ever observed in the entire sample of Kitavans.

Considering that included 300 adolescents, the results were rather surprising.

The study found that their genetics played barely any role in the results, and that they were mostly due to their dietary habits. The average Kitavian diet, in fact, resembles a lot that of cavemen from the pre-historic era that ended with the development of agriculture. It’s rich in fresh, natural foods that include mostly tubers, fruit, coconut and fish, with little to none of processed foods that we are so used to consuming on a daily basis. Coffee, tea, alcohol and dairy products are basically non-existent in their diet. Instead, they opt for foods with low Glycemic Index (GI) and rich in omega-3 fats, as that’s what their picturesque and unspoilt habitat provides them with.

As a result, the locals are also unfamiliar with Western chronic ailments, such as diabetes, cardiovascular disease, and dementia.

These findings are even more shocking when considering the fact that Kitavians don’t even exercise much!

I don’t know about you, but I think I could fit right in with the population of Kitava Island.

So now you know: eat more greens, drink more coconut water, enjoy more fish, and throw those chips in the garbage. They’re not worth it — words your skin and your waistline would say. 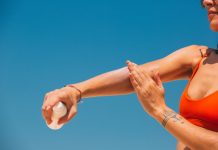