The weather is a harsh mistress in Montreal, Quebec, Canada.  The natives have fought back by establishing a modern wonder, Montreal’s Underground City.  The Underground, as the locals call it, is a remarkable pedestrian network of train stations, shops, hotels, restaurants, museums, and more, under downtown Montreal.

The underground city got its start in 1962 with the building of the Place Ville-Marie office tower and underground shopping mall.  That first mall connected the Central Station (subway) and the Queen Elizabeth Hotel via tunnels.  Since then, the Underground has grown to more than twenty-two miles of pedestrian walkways.

Residents of Montreal are extremely proud of their “inside city” (not all of it is underground), the largest underground complex in the world.  There are more than 150 access points to the subterranean city and more than 60% of the businesses in downtown connect to the underground.  Over 500,000 people traverse the below-ground pedestrian walkways and subways of Montreal each day. Several residential towers connect to the underground as well, allowing some locals to go from home to work to play without ever going outside.

A number of well-known tourist spots in Montreal are accessible from the underground city.  Things to check out without going out include Olympic Park and the Olympic Centre (built for the 1976 Olympics);  the Place des Artes, home to the Montreal Museum of Contemporary Art (Musée d’Art Contemporain de Montréal);  and Molson Centre, home of Montreal’s hockey team, the Canadiens. 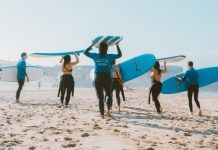 Australia’s Hidden Gems on the Coastline