A Malaysian Airlines plane has been forced to return to Melbourne’s Tullamarine Airport after a 25-year-old man tried to enter the cockpit under threat of having a bomb.

Flight MH128, which was flying from Melbourne to Kuala Lumpur, originally took off around 11pm on May 31, with the suspect making his threats 11 minutes later and the plane eventually turning back and landing just before midnight last night.

During the incident, witnesses have told, the economy class passenger was carrying a “strange looking object” and acted in a “disruptive” and “threatening” way, with another passenger recalling the man yelling, “I’ve got a bomb and I’m going to fucking blow the plane up”. 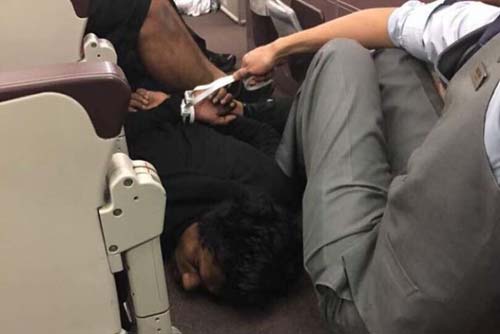 Upon landing, heavily armed police, wearing helmets, body armour, and carrying rifles, boarded the plane to arrest the suspect after crewmembers and roughly one passenger tackled and overpowered the man and tied him up with belts, and can be heard telling passengers to ‘get back in their seats, put their heads down, and phones away’ in a passenger made video of the incident.

In the aftermath of this incident, both Victoria Police and Malaysia’s Deputy Transport Minister Abdul Aziz Kaprawi have confirmed that the device the man was carrying was not a bomb, but instead a battery charger,

“It is not a hijack. One disruptive passenger tried to enter the plane’s cockpit. The passenger… claimed to have a bomb. But it was not a bomb but a powerbank (battery charger)”, said Mr Kaprawi.

Victoria Police Superintendent Tony Langdon also told reporters that they are ‘not treating this as a terror attack’, instead saying, “We do not believe this is terrorist-related,

“We are obviously concerned for the passengers and crew. It would have been a very traumatic experience for them”, he continued

“The circumstances are that the gentleman stated he had a device, and he had a piece of equipment which, for all intents and purposes, is something that everybody would be carrying around on a daily basis”.

5 Reasons You Should Travel Alone