Transitioning to a plant-based diet can be a difficult process, especially with delicious meaty, cheesy temptation lurking around every corner. Luckily, Melbourne has a myriad of restaurants that are revolutionising the concept of vegan food, making it easier than ever to have your (vegan) cake and eat it too. Here are some of our ‘vegan dupes’ for your favourite non-vegan meals.

The glorious tangy krauty-ness of a classic Rueben sandwich is something none should ever have to give up, and thanks to plant-based cafe Smith & Deli, you’ll never have to. Smith & Deli’s signature ‘Rubenstein’ sandwich features vegan pastrami, sauerkraut, pickles and russian dressing on rye. Offering over 30 unique sandwich options, Smith & Deli’s sangas are fully loaded with vegan meats, cheeses and sauces that push the boundaries of typical plant-based cuisine. If you like the Rubenstein, you may also like to check out their ‘Parmageddon’, ‘Little Havana’ and ‘Foghorn Legless’. 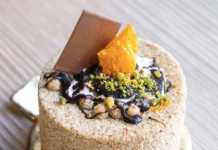