The U.S Open has copped flack this week for issuing a code violation to French tennis star Alize Cornet, who fixed her shirt when she realised it was on backwards after a much-needed break from the blistering heat on the court. This is just another scandal to hit the tennis world after the French Tennis Federation president banned Serena Williams from wearing her “Wakandan-inspired” catsuit again; though Serena stated that she wore the suit for health reasons.

Many people were outraged at the over-exaggerated actions of the tennis umpire, bringing up the fact that male tennis players are able to change their shirts during a match.

Though the U.S Open retracted the penalty and only issued a warning to Cornet, is this what tennis has now come to? Issuing unfair penalties and responding in an over-zealous manner over the simple fixing of a shirt? Yes, Cornet did break the rules by changing outside of a pre-determined break time and while not sitting in her chair on the sidelines, but the umpire shouldn’t have acted rashly.

After the incident, the USTA issued a statement, clarifying that players can change their clothes when sitting in the player chair. Despite this, the clarification should have made prior to the tournament, so that all players—male and female—have an equal understanding of the rules and to prevent events like Cornet from happening.

In a sport that is governed by rules, it is important not only adhere to them, but also not to let them cloud your judgement. 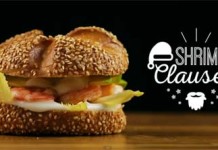 What the H**l is a Christmas Burger?

The Ultimate Guide to Christmas Nails