Open House allows the public access into the areas of Melbourne that are usually off limits. Between the 29th – 30th July, more than 200 buildings will be made available, largely for self-guided walk-throughs. Some popular sites will require advanced bookings and a small $5 fee.

Some of the biggest attractions include the National Gallery, Federation Square and The Emporium.

However, if you’re more interested in the architectural side, Open House also offers viewings of modern buildings, such as the RMIT University on New Academic Street. This recent project has transformed the campus into a light-filled, glass roofed, outdoor terrace wonder, and has opened the campus to the surrounding streetscape.

There’s also the option of visiting more historical buildings, some dating back to the 19th century. The Hellenic Museum (formerly The Royal Mint) is one of the few examples in Australia of the renaissance revival. The Melbourne Town Hall and Offices, as well as the Old High Court of Australia, will also be available.

Homesteads will be open to public access too, allowing observation of the décor and interior design of some of Melbourne’s most beautiful homes. With Chamfer House as an exquisite example of late modernism, and Doll’s House as an example of sustainable living, you’re bound to find some inspiration within.

If you want to step it up a notch, the Hotel Windsor is allowing pre-booked walk-throughs of its interior. The architect who designed the hotel, Charles Webb, was highly regarded and intended the hotel (then known as The Grand) to host the most stylish and luxurious accommodation in Melbourne.

Even those interested in something a bit darker will find their place! The newly renovated Pentridge Prison will show off its D-Division, which was once used for remanding prisoners, like Mark ‘Chopper’ Read. Additionally, Melbourne’s underground rail network can be explored with the Metro Tunnel Walking Tour.

There’s definitely something for everyone this weekend at Open House.

Three Sustainable Swaps you can Make to Your Routine 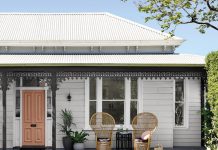 How to Prepare Your Home For The Market