In July 2015, my food-loving senses were completely in shock, as I watched Channel 9 television news with Peter Hitchener (go old Pete) relaying the news that Melba’s Restaurant had given over 60 patrons food poisoning during the high tea service on July 11th and 12th.

At that service was a lady who was celebrating her baby shower (yikes!), and had to go into labour five weeks early, thanks to the food poisoning she contracted at Melba’s restaurant. That’s got to be a big public relations disaster for not only Melba’s restaurant, but for the Langham Hotel that hosts this culinary dining experience in Southbank, Melbourne.

It was found later on, that the reason for the patrons of the fine dining establishment contracting salmonella poisoning, were the mayonnaise sandwiches served at the Langham high tea.

Now, I get that this would be a scarring incident for anyone who attended Melba’s on those days. However, I have been there over a dozen times in the last 5 years and I have had nothing but pleasant things to say about the food, service, and ambiance that has been provided by the waiters and chefs at Melba’s restaurant.

Being a foodie myself, I know what I like and am very picky with the types of food that I have. A 5-star hotel restaurant like Melba’s should have nothing but the best food, beverage, and service that any restaurant in their area has to offer.

From the fresh sushi and naan bread made in front of you, to the fresh steaks, pasta and noodles made to the specifications you want, how could you not enjoy yourself at Melba’s? It’s a beautiful restaurant in a world-renowned hotel that will just take your breath away.

If you have not been down to Melba’s and haven’t tried the gorgeous buffet, go down to Southgate Avenue, Southbank and enjoy yourself, as I am sure that you will never stop singing the praises of Melba’s restaurant. 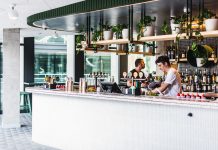