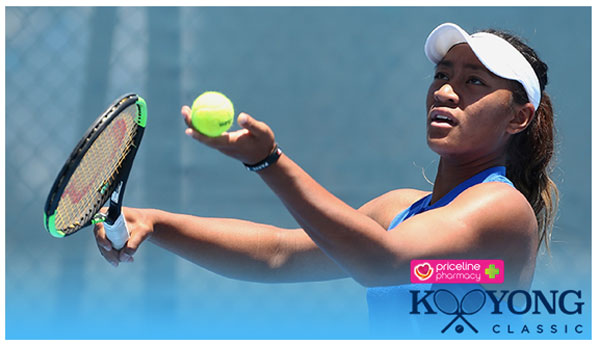 16-year-old Aiava, who is the Australian Junior Champion and also a Kooyong Foundation scholarship holder, will replace compatriot Ajla Tomljanovic who was forced to withdraw from the event while recovering from injury.

The Melburnian will give fans more than a glimpse into the future of Australian tennis as she prepares for her Australian Open debut, for which she has a wildcard as Australian 18 and under champion.

Aivava said a whirlwind couple of weeks will now extend into 2017.

“It’s been such a great few weeks winning the Australian Open wildcard and now being invited to play in the Kooyong Classic. For me, being from Melbourne and training so much at Kooyong it is going to be a fantastic experience playing there in front of home town fans.”

Playing against Sabine, Sorana and Qiang is going to be the perfect preparation for the Australian Open and I can’t wait.”

Coming to Melbourne with a world ranking of 72 the Peter McNamara coached Qiang Wang will be the first Chinese player to take the court at Kooyong.

The pair will join already named players Sabine Lisicki and Sorana Cirstea in the women’s draw, which will see females play at the famous Kooyong stadium for the first time in two decades.

“We have had such great feedback with the inclusion of the women this year that we have expanded the field to four girls,” Johnston said.

“We are delighted to welcome Destanee who truly is a big part of Australia’s tennis future. The opportunity for her to play against world-class players the week before her Grand Slam singles debut should be the perfect preparation.

“Qiang Wang is an emerging star in China. She is already the Chinese number two ranked woman and an Olympian, and it is great to welcome our first Chinese participant in the history of the Kooyong Classic.”

Joining them is Frenchman Lucas Pouille, Richard Gasquet, world number 20 Ivo Karlovic, Gilles Simon, Borna Coric, Mikhail Youzhny, Yoshihito Nishioka and one player that is yet to be announced.

The 2017 Priceline Pharmacy Kooyong Classic is proudly supported by principal partner, Priceline Pharmacy, with support from Thai Airways, Schweppes, Stella Artois and Lanson and Agnew Wines. The Seven Network will broadcast all four days of Kooyong’s action right across Australia.

Tickets are now on sale through Ticketek – www.ticketek.com.au

Ranking The Songs From SIX

Ranking The Songs From SIX