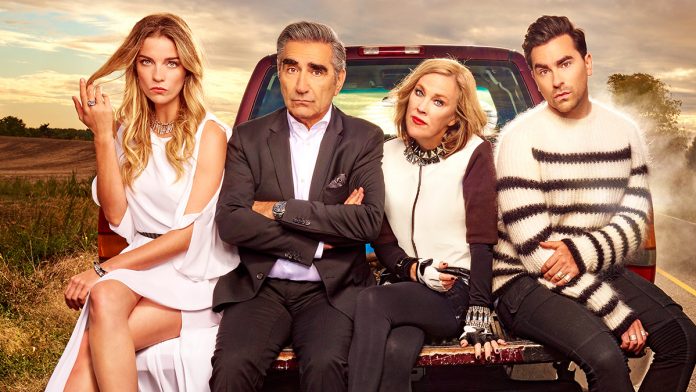 Despite Schitt’s Creek first airing all the way back in January of 2015, it seems like everyone has only just gotten onto the Schitt’s Creek bandwagon. The Canadian TV show about a rich family that suddenly loses all of their money and is forced to live in a small town is taking the world by storm. Early this year it even took the Emmys by storm. However, fans who are only just starting to watch will be disappointed to find out that the show has actually ended. The series’ final episode aired on April 7, 2020. So, why exactly is everyone finally praising Schitt’s Creek just as it ended?

Eugene and Daniel Levy, who are father and son both on-screen and in real life, started the show which premiered on Canadian network CBC in 2015. It wasn’t until it was added to Netflix in 2017 that American viewers began to pay attention. Since then the success of the show has been steadily rising. Fast forward to this year when Schitt’s Creek made history at the Emmys. The show’s record breaking nine wins was dubbed as the “Schitt’s Sweep.” This is the most wins for one season of a comedy ever. Schitt’s Creek is also the first comedy series to sweep all four acting awards in the history of the Emmys. This list of achievements is quite overwhelming and anyone that hasn’t seen the show may be thinking, is it really that good? Yes, it is.

What makes Schitt’s Creek so special, and deserving of its historic wins, is its genuine warmth. Despite the Rose family being somewhat stuck-up and selfish, you can’t help but fall for them. As the seasons progress you see them grow, both individually and as a family, and can’t help but want to see them succeed. The fictional town the show is named after is also a community in which homophobia has no place. The main love story between characters David and Patrick is accepted without ever being made the butt of a joke.

Aside from all that, the show is brutally funny. The show is filled with quick-wit jokes that match that of 30 Rock and Arrested Development. Just listening to Catherine O’Hara’s outlandish accent in the show is enough to make anyone laugh. All it takes is a quick google search of “Schitt’s Creek memes” to see hundreds of memes about the show’s hilarious main characters.

All in all, people can’t stop talking about Schitt’s Creek because it really is that good. The only downside to the show is that it didn’t achieve mainstream success sooner. So, if you haven’t seen it yet, and even if you have, I recommend going onto Netflix and starting it right now.