If there was any doubt as to it’s elitist standing, Los Angeles Airport (LAX) is upping its luxurious factor once more. For a mere $1,800 per trip, you can now enjoy a private lounge while avoiding paparazzi and those pesky fans. The addition to the airport is coming on the heels of the recent run-in between Kanye West and the paparazzi ending in what’s been described as a “chase on foot.”

But Kanye is far from the first celebrity altercation that could have been avoided had there been a more private channel for travel to and from Hollywood. The Board of Airport Commissioners voted unanimously for the lounge and parking garage. The project will include a 43,000 square foot building and a 13,000 square foot parking lot with connecting tunnels to the south of the main airport.

The airport, in conjunction with it’s partner, Gavin de Becker and Associates, stands to make more than $34 million over the 10 year lease they’ve accepted.

There are already elite facilities similar to the building proposed in Amsterdam, Dubai, London Heathrow, and Paris, but this will be the first of it’s kind in the United States. Given the traffic of celebrities and other high-profile travelers coming in and out of LAX everyday, the renovation is slated to benefit the stars and the normal folks alike.

Next time you’re flying through, it might be more difficult to spot your favorite pop star, but at least you won’t get bowled over by your icon’s other adoring fans.

How to Spend 48 Hours in the Southern Highlands Wine Region 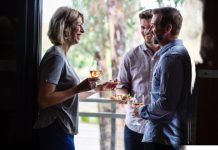 Spoil Your Loved Ones This Christmas