Gucci unveils a new way to advertise their pre-fall 2016 collection in the form of a four-part short film directed by Gia Coppola in partnership with Gucci and Condé Nast. Also known as a fashion film, this visually stunning media production brings together the mutual beauty between fashion and cinema. This digital film stars models Lou Doillon (French artist) and Marcel Castenmiller (model/photographer) as the two main protagonists, along with a handful of other wonderfully casted models all decked out in, of course Gucci’s pre-fall collection.

The short film revisits one of the world’s oldest and most tragic stories, the myth of Orpheus and Eurydice. With a modern and Gucci-like twist, it’s set in modern-day New York. Condé Nast CEO Bob Sauerberg has said that this collaboration between the media studio and one of the biggest luxury houses in the industry is one of the most “creatively ambitious branded projects” ever to be embarked on. The enchanting and ethereal film, with Gucci’s nostalgic touch, an original soundtrack supplied by Devonté Hynes and styling direction from costume designer Arianne Phillips, feels like an editorial that’s jumped out from the pages of magazines, exemplifying the magnificent relationship between film and fashion as an aesthetic.

This allows for so much creativity and charm for this genre, where there are no specific rules or features needed to qualify what could be considered a fashion film. The only requirement, as Gucci’s shots have done, is to showcase the clothes in subtle artistic ways where one forgets about it being an advertising tactic for consumerism, but rather for the enjoyment of an art. These shots range from narrative, abstract and even experimental and give entrance into a world of artistic development to express the means of aesthetic, emotion, or even just to mess around with some freedom not usually seen in cinema. 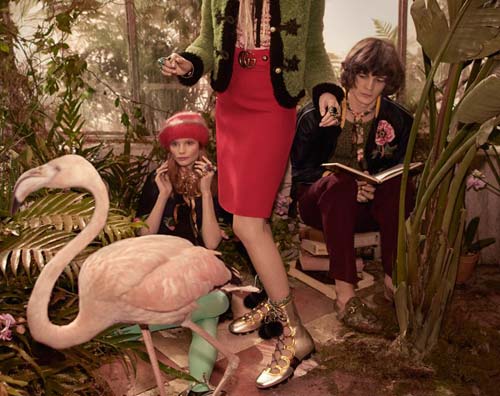 The relationship between fashion and cinema has created such a bond between the industry and emerging artists that an annual film festival has even launched to celebrate the way in which fashion is presented in the “conventional parameters of film”. The film festival called A Shaded View on Fashion Film (ASVOFF), launched in 2008 and has since gained critical acclaim on par with the likes of the Cannes film festival. Annually, the festival begins during fashion week in Paris and tours the world with screenings at prestigious institutions and events.

With many other household names like Miu Miu and Chanel already having dived into this genre of advertising to appeal more to a wider market of audiences, it’s exciting to see where this genre will go next and who will be the next big name to incorporate the media of film to showcase fashion in motion. It’ll be interesting to see, as motion media becomes increasingly more popular for branded content, if there will be an increase in profit or traffic towards a brand’s success.

Or perhaps it’s just another way for the industry creative to blow off some steam and have some fun with their collections.

What is Valentine’s Day?